mousemusings...multimedia, music, progressive politics, video, web design and general rants
Human beings will be happier - not when they cure cancer or get to Mars or eliminate racial prejudice or flush Lake Erie but when they find ways to inhabit primitive communities again. That's my utopia.
~Kurt Vonnegut
Tuesday, June 27, 2006
Update On Spy Disclosures

Fresh from a bout with the Press regarding disclosures of spying on financial institutions, Vice-president Cheney has taken up a new cause. The Reuters news agency has revealed operational details of yet another spy plot:

OSLO (Reuters) - Thousands of marine animals could be tracked under a $150 million project to understand threats to life in the oceans with technology perfected for supermarket checkouts, scientists said on Monday.

Under the scheme, scientists would implant electronic tags into creatures such as salmon, tuna, sharks, sturgeon, penguins or polar bears to register their movements via acoustic receivers on the floors of the oceans or via satellite.

"Today we know less about our marine life -- how these animals live, where they go -- than we know about the back side of the moon," said Ron O'Dor, head of the Ocean Tracking Network to be set up at Dalhousie University in Canada...

Cheney thundered his complaint, that "now the fish will know we are tracking them." He added, "this will cause them to seek new routes and hiding places, leading to frustrated fishermen around the nation." He implied that incidents of face-shooting will become more common, as tempers flare on streams and waterways. posted by : Joseph j7uy5 | link |    | |

I used to blog about this kind of thing fairly often. I do it less, now, partly because so many other people are doing a fine job themselves. This time, I am not writing in order to make a significant contribution to public debate. Rather, I am writing it in order to feel better.

Several newspapers reported on the Administration's use of information from the Society for Worldwide Interbank Financial Telecommunication (SWIFT) to track financial transactions. The reported intent is to track terrorist financing.

The Administration protested the reports, because, in the words of President Bush:

There is no evidence of harm, nor is there a plausible explanation for how this harm would come about. It rings false, because it is already common knowledge that the Administration tracks financial information. In fact, if the Administration is to be believed, they have already seized something like two hundred million dollars in suspected terrorist funds. There's even a book about it.

All the newspapers did, was to reveal some additional details. Most of their disclosure pertained to the question of whether the program is legal.

Personally, I don't think that al-Qaeda (or any other terrorist organization) cares if the program is legal. They are not exactly constitutional scholars. Furthermore, I should think that if millions of dollars have already been seized, the fact that the money is now gone just might have tipped them off to the existence of the program.

BTW, the title of the post comes from a post on Booman Tribune, which is more thorough than this one. So maybe others have covered this more comprehensively that I did, but I feel better now for having posted this. posted by : Joseph j7uy5 | link |    | |

It is:
* deep and pervasive (representing over 80% of learning that occurs in organisations)
* uncontrolled (most is through colleagues and self discovery  without the training department in sight)
* powerful (this is the driving force of the real learning culture of the organisation, influence this and you will radically change the way your organisation learns)

Who uses informal learning the most? How much do companies value it?
There is often such an emphasis on higher learning but the cost is prohibitive. Will we begin to value people who have learned mostly through informal learning or is that piece of paper always going to be the division between the nobody and the somebody?
Yep, I know. Why is that? posted by Cyndy | link |    | |

While I was reading about the Mall of America the US is building in Baghdad, I ran across a blog back to the Redneck Liberal. The title to his post,
Republicans are Social Darwinists and Democrats are Mostly Wimps caught my eye. After reading both links I found myself wanting to pretend...
as Derrick Jensen writes in Endgame:

Would I rather pretend I'm better than everyone else, hole up in my private bunker shared with 8000 other pretenders, or pretend I unlearned all of this?
Of course I could also pretend that electonic voting machines are the biggest hurdle to fair elections, pretending to forget about the Jim Crow GOP. posted by Cyndy | link |    | |

I first heard about The Center For Michigan on Jack Lessenberry's blog. But when I first went to their website, there was almost nothing there. They don't call themselves a think tank, but it appears that that is what they are. The idea behind the Center is to promote moderation in the political process in Michigan.

After signing up for their email notifications, I did not get anything for quite a while. More recently, though, I have gotten some of their emails. I must say, the essays by Phil Power are very interesting. For example, in his report about a recent conference regarding the Michigan Single Business Tax:

Politically, it's remarkable how one-sided this discussion has become. One side, mainly the Republicans and the Chamber of Commerce, is talking as though a $500 million business tax cut is the only thing that is going to restore our economy to perfect health.

And there's nothing whatsoever coming from the other side. The Democrats are scared stiff at being labeled in favor of higher taxes, while the cities, hospitals and universities have been largely silent. What's most appalling is that there is nobody in the middle who is trying to assemble and consider the evidence in a fair-minded way. It's just another illustration of the fact that our politics today are driven by the extremists of either side.

In this case, the tax-cut zealots of the right are in the saddle. And the tragedy is that the concerns of ordinary people, those who may not love taxes but who desperately want good schools and good streets, are largely being trampled on or just plain ignored.

Unfortunately, the full text is in an email, and I can't find the essay anywhere on their website. The site is still being developed. They plan to have a "forum," which presumably will allow comments. In fact, I expect that it will be indistinguishable from a blog. Even so, I did find the essay on the Hometown Life site, here.

Some interesting items that are on the Center website, currently on the home page, include this...

IS NOT A . A generation ago, residents were among the most highly taxed in the nation. Now, as taxation is the most significant ongoing policy battle in , the states total per capita burden for state and local taxes is safely in the middle of the pack according to a new, nationwide comparison. still ranks pretty high for overall property taxes (16th), tobacco taxes (2nd) and corporate income taxes (9th). But in other respects, is a great place to be a taxpayer. For individual income taxes, we rank (32nd), motor fuel taxes (43rd) general sales taxes (27th), special sales taxes on such things as liquor, gambling, etc. (29th). Get those numbers in the report this week from the Citizens Research Council of Michigan.

TO DRAW POLITICAL BOUNDARIES. If you want your legislators and members of Congress to be elected through tough competition, dont let the politicians draw the boundaries. Thats what Bob LaBrant, vice president for political affairs at the Michigan Chamber of Commerce suggests this week in the Press & Argus. While likes to gerrymander, other states like use non-partisan government bodies to handle redistricting every ten years. Click here for a quick study of the system  youll see why Iowans have more competitive races than we do.

Although those of us who post at MouseMusings are, in general, more on the progressive side than the moderates who are participating in the Center, I do find their material to be thoughtful and informative. posted by : Joseph j7uy5 | link |    | |

Western scientists have all but ignored it for decades, reluctant to risk their careers by researching a substance containing the outlawed DMT. Only in the past decade, and then only by a handful of researchers, has ayahuasca begun to be studied.

At the vanguard of this research is Charles Grob, M.D., a professor of psychiatry and pediatrics at UCLA's School of Medicine. In 1993 Dr. Grob launched the Hoasca Project, the first in-depth study of the physical and psychological effects of ayahuasca on humans. His team went to Brazil, where the plant mixture can be taken legally, to study members of a native church, the União do Vegetal (UDV), who use ayahuasca as a sacrament, and compared them to a control group that had never ingested the substance. The studies found that all the ayahuasca-using UDV members had experienced remission without recurrence of their addictions, depression, or anxiety disorders. In addition, blood samples revealed a startling discovery: Ayahuasca seems to give users a greater sensitivity to serotoninone of the mood-regulating chemicals produced by the bodyby increasing the number of serotonin receptors on nerve cells.

Unlike most common antidepressants, which Grob says can create such high levels of serotonin that cells may actually compensate by losing many of their serotonin receptors, the Hoasca Project showed that ayahuasca strongly enhances the body's ability to absorb the serotonin that's naturally there.

"Ayahuasca is perhaps a far more sophisticated and effective way to treat depression than SSRIs [antidepressant drugs]," Grob concludes, adding that the use of SSRIs is "a rather crude way" of doing it. And ayahuasca, he insists, has great potential as a long-term solution. [read more]

A vivid, first-hand account of a shamanistic journey, skirting the edge horror and back,. Note the awareness, yet the overwhelming feeling of losing control of the demons inside and the eventual strength derived from the experience. Not an experience one would enter into without very deliberate intention. I'm not at all sure I would undertake a journey such as this, however, I have to wonder what the potential really is and also wonder why it's such a problem in our culture to study and develop these techniques. posted by Cyndy | link |    | |

Seed Media Group has added a few new bloggers to the Science Blogs community. Of course, my favorite is Corpus Callosum, authored by Joseph j7uy5, who has been helping keep mousemusings squeeking along and has also been helping keep a smile on my face. I hope his new endeavour with Science Blogs doesn't keep him from continuing to post here when the desire/passion/outrage strikes. Stop by and see where the left brain meets the right brain. posted by Cyndy | link |    | | 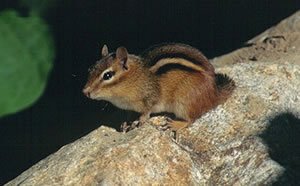 That is the noise outside my window, loud enough to pierce through dreams. He's a cutie, but I think I'll stock some raisins to throw at him next time he wakes me up. posted by Cyndy | link |    | |